After what looked like a possible setback, plans have moved forward to build a mixed-use commercial and residential development at the site of the Searstown Mall in Titusville.

Developers California Retail Properties’ plans hit a snag when it became clear the development might be taller than is currently allowable by the city. But the Titusville City Council last week approved the height of the building on the condition that it is set back from the property line by at least the same distance and uses modern storm water management techniques.

Developers are now cleared to proceed with the project which envisions an urban village combining ground-floor retail area with mid-rise apartments and a hotel at the site of the Titusville Mall.

Titusville City Council reclassified the old mall and potholed parking lot a few years ago from commercial high-intensity zoning to urban mixed-use to make way for the new development.

Under the latest plans, the dilapidated property will transform over the next years into hundreds of private residences, with an layout that includes pedestrian walkways and green spaces open to the general public.

The property will have one-to-three-bedroom mid-rise apartments in a six-story building facing U.S. Highway 1 and the Indian River Lagoon, with the first story comprised of retail space, Wright said.

After the demolition of Sears and the movie theater, the retail space will include two restaurants.

The project received support from community members who spoke at last Tuesday’s meeting – many of whom look forward to seeing the old dilapidated location turned into a more modern space.

Cindy Mott, manager of the Titusville Antique Mall on the property, said she and the 80 independent business-owners who operate out of the mall were excited for the change and the chance to move into a newer building.

“We have vendors from the age of 24 years old… to 86 years young. They live from all over Brevard and Orange County, and they come here specifically to the Titusville mall,” she said.

“Our vendors understand this project… but I can tell you as their spokesperson it is unanimous support,” she added.

Even though the new building will mean a big change with lots of effort for businesspeople like Mott, she hopes it will revitalize the location. 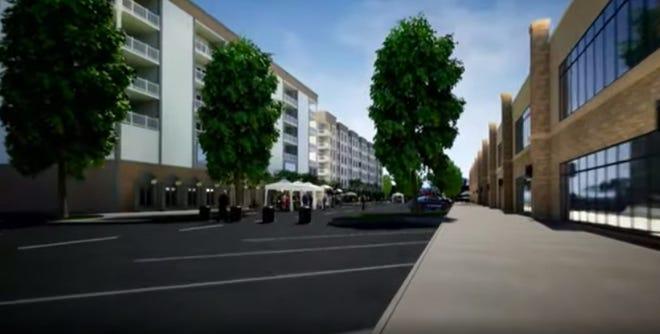 Jesse Wright, CEO of California Retail Properties, said the development will also use low-impact techniques that will increase stormwater treatment by 10% more than is required and will also feature electric vehicle charging stations. The low-impact stormwater management plan is part of the conditional-use permit to allow the increased height of the building.

He added that he is expecting to begin the process of taking down the new building and submitting final site plans early next year, pending financing issues and weather. ULA launched a $1.5 billion NASA mission from Cape Canaveral that aims to send a science probe closer to the sun than any spacecraft before. The Parker Solar Probe — NASA’s first mission named for a living person — rumbled from the Space Coast at 3:31 a.m. Sunday atop one of the most powerful American rockets, United Launch Alliance’s 233-foot Delta IV heavy. (Photo courtesy: Derek Demeter)

The Space Coast area has made a list of the 10 best performing cities in the U.S., News 6 partner Florida Today reports.

The Milken Institute, a nonpartisan economic think tank, uses an index to grade communities on measures that include job growth, wage growth, and growth of high-tech industries within metropolitan areas. The Space Coast shares 2020’s top 10 list for big cities with major metros like San Francisco, Seattle, and Austin, Texas.

The Space Coast jumped 47 spots from its 2018 ranking. This year, it ranked fifth for job growth over the past 12 months.

In the report, the Milken Institute writes that the Space Coast’s performance stems from its growing high-tech industries in the aerospace and defense sectors, along with its attractive weather and the location of Port Canaveral. However, the Space Coast is vulnerable because some of its largest industries — defense, tourism, and health care — are vulnerable to recessions, according to the report. Diversifying the economy and deepening the local talent pool would make the area less prone to recessions, the report states.

Lynda Weatherman, president and chief executive officer of Economic Development Commission of Florida’s Space Coast, said in a news release that the Space Coast’s appearance on the list shows how far the area has come since the end of the shuttle program and the 2008 recession.

“Judging by the company we keep, including communities with much-larger populations, Brevard County is now considered one of the elite metropolitan economies in the nation, “Weatherman said.

What was the peak population of Titusville?

-The current population of Titusville (46,580) is it’s peak population.

How quickly is Titusville growing?

-Titusville has grown 13.6% since the 2000’s. Titusville, Florida’s growth is about average 46% of similarly sized cities are growing faster since 2000.

What county is Titusville, Florida in?

-Titusville has an unemployment rate of 5.1% The US average is 6.0%

-Titusville has seen the job market increase by 1.9% over the last year. Future job growth over the next ten years is predicted to be 40.7%, which is higher than the US average of 33.5%

– Tax rates can have a big impact when comparing cost of living.

Income and Salaries for Titusville The Washington Post calls it the “comeback coast” — for good reason. After falling into a state of decline, the Florida Space Coast is booming once again thanks to a number of private space companies and other startups setting up shop at the Kennedy Space Center and surrounding region in Brevard County. The investment money is pouring in, stimulating a rapid revitalization of the birthplace of America’s Space Age. In July 2019, Lockheed Marin moved its fleet ballistic missile headquarters from California to their campus in Brevard County and intends to invest about $40 million into the campus. They have already moved 350 employees and will likely be adding new jobs as all missile contracts will now come out of this location in the Space Coast, as reported in Florida Today. Blue Origin, the company led by Jeff Bezos has already invested more than $1 billion into the area to build it’s 750,000 square foot New Glenn factory at Kennedy Space Center’s Exploration Park and intends to almost double the campus size in the coming years and bring hundreds of employees and potentially thousands of tourists.

Growth is also continuing for Elon Musk’s SpaceX, which in May 2019 launched its Falcon 9 rocket along with 60 Starlink satellites to start the companies own internet service. It is reported that SpaceX intends to develop its own rocket factory in Brevard County. L3Harris Technologies, born from the recent merger of L3 Technologies, Inc., an aerospace tech company, and Harris Corporation, a defense contractor, is now the largest aerospace and defense company based in Florida and a top 10 defense company worldwide. The new company, which has $17 billion in annual revenue, decided to keep its headquarters in Melbourne, Florida, and has plans to expand the local workforce there. Nasa is currently developing its most powerful rocket yet, the Space Launch System, with the help of local aerospace firms, including Lockheed Martin, Boeing and Northrop Grumman. In 2011 when NASA ended its 30 year space shuttle program, which was sustaining the peak of the recession, Brevard County has an unemployment rate of 12% and home prices had plummeted from a median price of nearly $250,000 in 2007 to less than $100,000 by 2011, as reported on Zillow.

Since then, as noted in The Washington Post article, local leaders have successfully worked to diversify the Space Coast economy and even have implemented special taxing districts with incentives to lure different types of businesses to the area. Residential communities are being built up and down the coastline. The unemployment rate dropped to below 4 percent earlier in 2019, and housing prices are back to their pre-recession value. The tax base has bloomed with monthly taxable sales rebounding from a low of nearly $450 million in 2010 to more than $850 million in 2018. No doubt, the influx of industry from Blue Origin, SpaceX, L3Harris and others tied to the space field is creating jobs and driving the economy. As noted by Brian Alford, an economist for CoStar Market Analytics, the Space Coast is benefiting from population and job growth rates that have outperformed the rest of the nation in recent years. “With all of the development in and surrounding the Kennedy Space Center, this is the perfect time to invest in real estate in the Florida Space Coast,” said Francis Lively, CEO and President of The LCP Group, L.P., a 45-year-old real estate investment management firm that currently has a high-yielding investment opportunity in Melbourne (with the option for an EB-5 green card). “Our new Hilton Hotel in downtown Melbourne will cater to these private space companies, their travelers and, of course, to the surge of tourists in the area.” This increased activity is having a positive trickle effect – the job market that’s being revived by the private space industry is helping to spur commerce, which in turn leads to a better economy and higher real estate values. All of this could help the Florida Space Coast become one of the strongest U.S. industrial markets in the next 5 to 10 years.

Titusville Resort & Destination is a redevelopment mixed use project covering 22 acres on US1, facing Cape Canaveral.

The property on the first phase will have 240 apartment in a seven story building with one hundred independent senior living (age restricted 62+) in a six story building facing Country Club Drive, with 20,000 sq ft retail spaces on the ground floor. A club house and courtyard pool would be built in the middle of the complex. Two restaurants facing US 1 and Cape Canaveral will be on the outparcel.

The property on the second phase will have a six story Cambria hotel with 153 rooms and 90,000 square feet. An attached 4,000 sq ft restaurant will be built east of the hotel (not a part of the hotel)

The third phase of the project is the commercial portion with 110,000 sq ft shopping center facing Hopkins Avenue on the west side of the property with uses such as retail, offices, and medical. We have released 30,000 sq ft to hospital and retail.